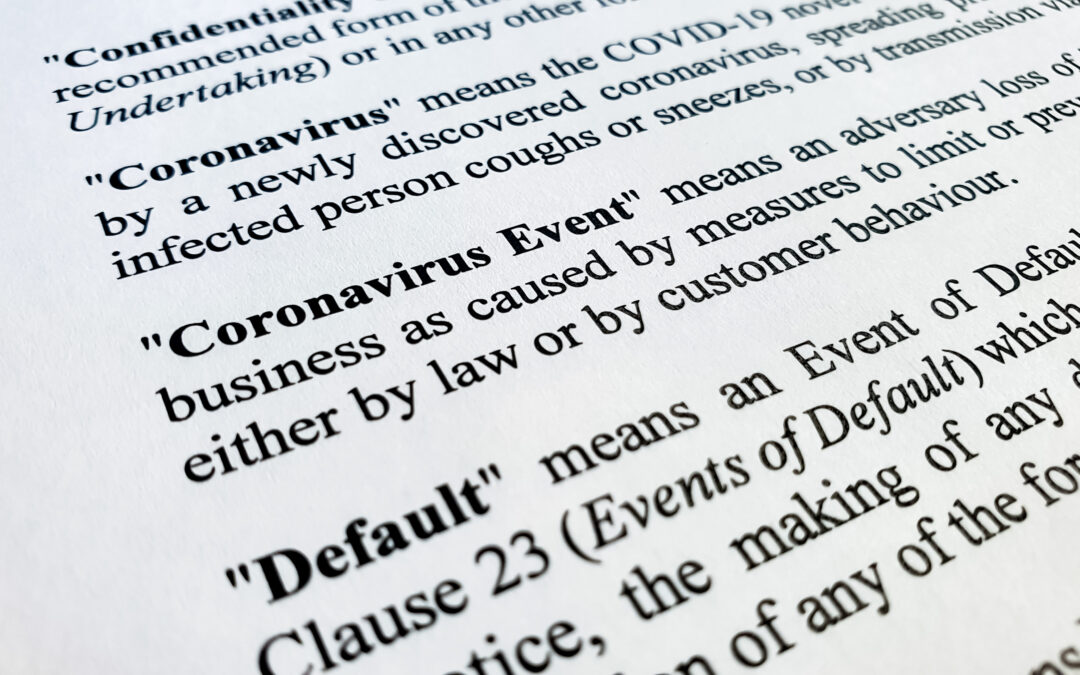 On January 15, 2021, the UK’s Supreme Court (UKSC) rendered its much-awaited decision on business interruption (BI) coverage for COVID-19 (the “Test Case”). See our earlier postings for a review of the lower court decision[1] and a summary of the nature of BI coverage.[2] BI coverage is typically offered as additional insurance on a property insurance policy. BI coverage is designed to protect the insured from lost revenue and increased business expenses that might result from a covered property loss policy (such events being described as “insured perils”).  However, many policies also include “extensions” which provide coverage even where there may be no damage to, or loss of, property. Examples include interruption of utilities, and damage to a supplier’s facilities. It may also include cases where a party is unable to use its premises because of orders made by a civil authority as a result of a pandemic.

As businesses were shut down as a result of the COVID-19 pandemic, some insurers began denying BI coverage on the basis that the pandemic was not covered. Proceedings were filed by UK’s Financial Conduct Authority (FCA), as a test case, to bring clarity to ongoing COVID-19 BI coverage disputes. Sample policies and fact scenarios were presented to a two judge panel, which rendered a decision on September 15, 2020.  Many insurers appealed, and the FCA cross appealed, in late September.

The UKSC noted its decision could affect the interpretation of around 700 policies issued in the UK by over 60 insurers to 370,000 policyholders.[3]

In a decision over 100 pages long, the UKSC ruled in favour of policyholders on almost every issue. As of today, there are no reported cases in Canada on the merits of coverage for BI losses caused by COVID-19, and this case will likely be positively received by our courts. Although the decision (and the reasoning underlying it) will not be binding in Canada, our courts tend to place significant weight on UKSC decisions, especially on issues never before decided in Canada.

Nonetheless, when Canadian courts assess coverage, they begin by reviewing the particular wording of the policy at hand. Many Canadian policies use wording different from that considered by the UKSC. To determine if the interpretation of your policy might be affected by the Test Case requires a careful and thorough review of your policy.

The UKSC placed the issues before it into categories, the most important of which were:

The UKSC’s findings in these categories are discussed below.

The disease clauses considered by the court specified that coverage would be triggered by the “occurrence” of a “Notifiable Disease” within a specific distance from the business’s premises – generally, 25 miles or less. A “Notifiable Disease” was defined as an infectious or contagious disease that local authorities have stipulated must be reported to them. In the UK, COVID-19 is a “Notifiable Disease”.[4] Since the outbreak of the pandemic, Ontario and other provinces have similarly designated COVID-19 a reportable disease.[5]

The court then explained that an “occurrence” of a disease means a single case of the disease. To trigger coverage under the diseases clause, the insured simply needs to show that at least one person resident within the specified distance has contracted COVID-19.[6]

The trigger to coverage (i.e., the insured peril) may have been different if other terms had been used in the policy (e.g., if coverage was triggered by an “outbreak”).[7] This again emphasizes that not every policyholder’s case will clearly fall within the ratio of the Test Case. A careful review of one’s policy is needed to understand how this decision might affect the analysis, if at all.

The court accepted that the disease clauses did not insure against COVID-19 cases outside the distance specified in the policy. However, it rejected the rest of the insurers’ argument. To determine if a policyholder’s losses have been caused by an insured peril, one must determine if on a common sense basis, the insured peril is a “proximate” cause of the losses. The analysis must also be grounded in the policy’s terms.[9]

The UKSC then found that the insured peril, each case of COVID-19 within the distance listed in the policy, was a proximate cause of a policyholder’s losses. It relied on a hypothetical scenario where 20 people combine to push a bus over a cliff, but where the bus could have been pushed over the cliff by 14 people. One person acting alone could not have pushed the bus over. Nor were each of the 20 necessary to push the bus over. Take any of them away and the bus still goes over the cliff – 19 people are more than the 14 needed. Nonetheless, common sense would suggest that each person was a proximate cause of the bus going over the cliff.[10]

The parties would have intended for COVID-19 cases to be considered similarly. They would have understood the nature of infectious diseases – namely, that a single case within 25 miles of the premises would not have caused losses. Any losses would be caused by the combination of all cases, only some of which would be within 25 miles. Removing a single case would not have avoided all losses. The only way for there to be any coverage would be if the parties accepted that in the event of an outbreak of a disease causing BI losses, a single case within 25 miles, acting in combination with other cases, would be considered a proximate cause of the losses.[11]

The prevention of access clauses before the UKSC set out several preconditions for coverage. The first was “action”, “closure” or “restrictions” “placed” or “imposed” by a public authority. This precondition does not require a formal statute or regulation. It would be satisfied by an announcement of a public authority, in expectation of a statute later being enacted (e.g., when the UK Prime Minister made a March 20, 2020 statement ordering businesses to close that night).[12]

The court noted that to trigger this coverage, the restrictions must result in an inability to use the business premises. This does not mean the insured must prove its entire premises cannot be used for any purpose. If it cannot use a discrete part of its premises for business activities (e.g., if a golf course can continue to operate but must close its clubhouse), this precondition is satisfied. It is also satisfied if the insured cannot use any of its premises for a discrete business activity (e.g., if a restaurant can offer take-out, but no in-restaurant dining).[13]

Moreover, as discussed above, to recover under the policy, the insured has to show that the insured peril (i.e., certain orders imposed by a public authority) was a proximate cause of losses. Again, common sense is to be used. The court gave an example of a travel agency that incurs losses following COVID-19 travel restrictions. Although the agency may have also been subject to an order prohibiting it from using its premises, that order might not be a proximate cause of the losses. The travel restrictions might be the only proximate cause, barring coverage.[14]

A trends clause does not delineate if there is coverage. Instead, it helps calculate the amount of a covered loss, once the insured peril (an individual occurrence of COVID-19 or an order of public authority) triggers coverage. The insurers argued that to apply a trends clause, a court must account for every factor impacting the business at the time of loss, other than the insured peril. Since neither the pandemic nor non-local cases of COVID-19 were insured perils, the consequences of both should be considered a trend which should reduce the amount payable.[15]

The court rejected this argument, noting that the consequences of an individual occurrence of COVID-19 or order of public authority would be inextricably linked to effects of cases outside 25 miles and the pandemic as a whole; the various consequences could not be distinguished from each other. Furthermore, the trends clause should not negate coverage provided by the disease and prevention of access clauses. Those clauses covered business losses caused by an individual local occurrence of COVID-19 or order of public authority, even though the losses might also be caused by non-local occurrences and the wider pandemic. Adjusting losses so nothing attributable to the wider pandemic was payable was another way of trying to exclude coverage for losses concurrently caused by the insured peril and by the wider pandemic. This would negate all coverage, which was not what the parties intended. The trends clause only permitted adjustments necessary to account for factors totally unconnected with the insured perils.[16]

This is a well-reasoned decision on coverage issues important to Canadian policyholders who claimed BI losses resulting from COVID-19. If you think you may have a claim but have not yet notified your insurer or broker, consider doing so as soon as possible. As we noted in an earlier posting[17], it is always good practice to submit a claim as soon as possible. BI policies typically require the insured to give written notice of loss as soon as practicable. Moreover, if your insurer denies your claim, your only recourse will typically be to issue proceedings. Many policies require that such proceedings be brought within one year after the loss first occurs.

Lawrence G. Theall is the founding partner of Theall Group LLP. He practices commercial litigation, insurance and product liability (including class proceedings), and has appeared before all levels of the Ontario and Federal courts, as well as the superior courts of Manitoba and Alberta. He is honoured to have been selected as a Lexpert Ranked Lawyer for Product liability and selected by his peers for Best Lawyers 2021 for Insurance, as well as in  Expert Guides in the areas of Litigation, Product Liability, Insurance and Reinsurance. He is an editor for the Insurance chapter to be published in Bullen & Leake & Jacob’s 3rd Edition of Canadian Precedents of Pleadings in 2017 and a co-author of the annually updated loose-leaf text, Product Liability: Canadian Law and Practice (Canada Law Book)